We took our bikes when we went to Edisto Island, and used the bike path frequently. The bikes were certainly a highlight of the trip. We rented a couple trail-a-bikes for the smaller kids and a bike trailer. Elsie and Evie would trade off with Eli and Jack for the trail-a-bikes. All four couldn't wait for their turn. It was a perfect way to navigate through the island traffic without worrying about safety. Last year Emily had just switched over to a 21 speed mountain bike, and it was a little much for her. She obviously has grown a lot in the last year and can handle her bike much better. Our beach house rental backed up to the bike path, and Emily got to do some "big girl stuff" and rode by herself around the block and back around the bike path. She loved riding her bike.

Once we got home, we decided that Emily was old enough to go on a big bike ride out of the neighborhood with us. She rides her bike a lot in the neighborhood, but we have worried about her ability to navigate traffic.  I took her on a 10 mile ride through roads my running partner and I would train on before the half marathon. The roads are mostly back roads, and they have pretty large inclines. 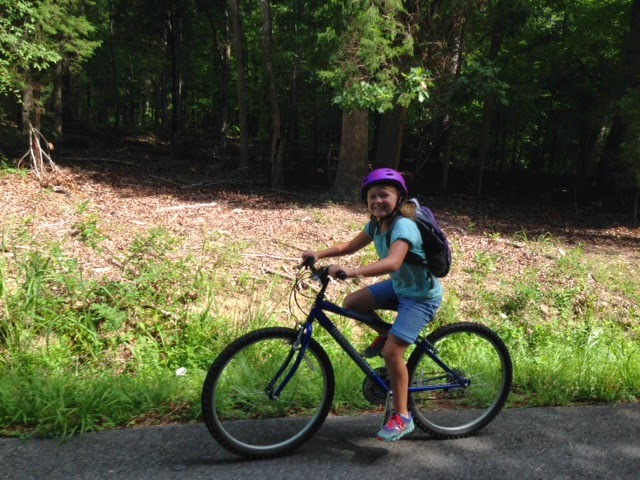 We decided to take our backpacks and bring some baggies to pick blackberries. I am not gonna lie... about half way through the first bush, I remembered what a friend told me about this year being a horrible year for cotton mouths. Emily and I did a lot of leaning over to pick the berries after that.

One of the largest hills seemed to be troublesome for Emily. I thought she was right behind me, but when I got up to the top and turned around, this is what I saw. 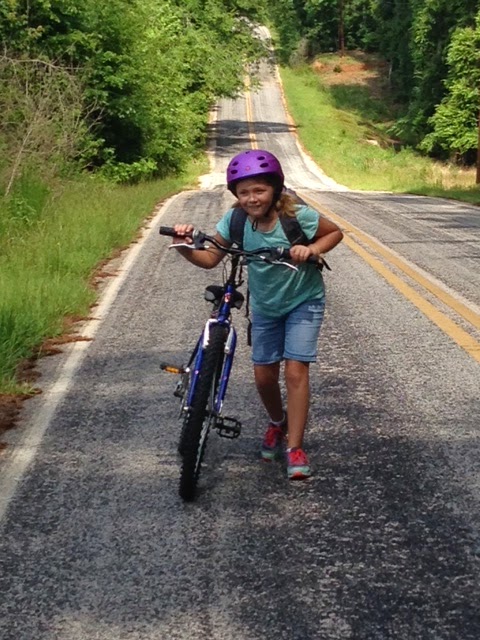 She told me she planned on running up the hill with her bike and jumping on at the top before I noticed. We laughed and laughed. Then, she decided that the top of the hill was a great place for a water break. We pulled our bikes over to the side of the road, and pulled out our water bottles. But poor Emily. There was only one fire ant hill in sight, and unfortunately for her, we saw it too late. 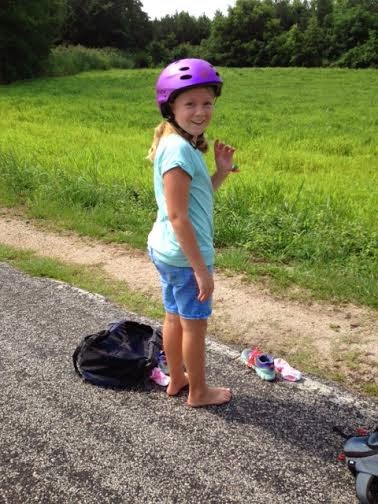 I quickly pulled off her socks and shoes, and picked the fire ants off her feet, ankles and legs. She had bites all over the place, and some were already starting to blister. And we still had about four miles left to ride home. Thank goodness Emily is tough!

We had a great time on our bike ride, and collected enough berries to put in a cobbler with some peaches. Scott said he was a bit jealous of this time with her, and the next night he took her out on a late evening ride. He said they enjoyed watching all the fireflies through the corn fields. I think she and I will take another late evening ride. She is getting so big so fast.

Posted by Scott and Malisa Johnson at 8:59 PM 1 comment:

My kids have always been great sleepers. When they were babies I took some credit for that, but then all credit moved to Mrs. Shari who had them down for a nap every day precisely at 1 p.m. And in a perfect world, they would be home for nap time at exactly 1 p.m. Obviously there is no perfection in the Johnson household, so when 1 p.m. comes, these sweeties drop where they are.


Posted by Scott and Malisa Johnson at 1:26 PM 2 comments: