This afternoon we had a tornado warning for our county. A "tornado watch" is when they expect that the current conditions could eventually produce a tornado. A warning though means that an actual tornado has formed.

Well... wasn't this exciting. We spent over an hour in the hallway where it was safe. Some students cried, and when it was time for dismissal, we couldn't dismiss students. I think we only stayed about fifteen minutes after dismissal, but still. When some children had parents who were picking them up, the others who were left got upset that their parents weren't there. Besides that, we had to sit with the fifth graders too, and the entire hallway was packed. Ah, and I can't forget to mention that the hallways aren't air conditioned... just the classrooms but the doors had to remain closed for safety. Very stinky in that hall, but I guess if something drastic happened, we would all be safe.

But then I get home right away (scott had already picked up Emily) and they are calling for tornado watches and warnings all over the state. Nothing much came after that. Rain and a bit of wind, but surely not the golf ball-sized hail that was predicted and pelted other towns and quite a few tornados formed, and many of those touched down. Scott thinks about a dozen in all.

Very interesting. I learned a lot today.
Posted by Scott and Malisa Johnson at 9:06 PM No comments: 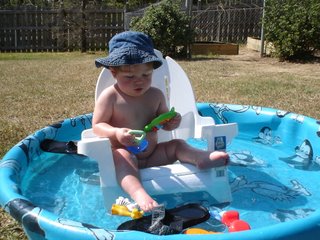 So what is up with the near 90 degree temps here? Oh my gosh! And Hurricane season doesn't "officially" begin until June 1st. But apparently the forecast came out that a "major" hurricane will hit the east coast this season. I guess just because it hasn't happened in awhile statistically makes it more likely, therefore the 81% number was flashed on the news. Either way, Scott has prepared our family with an "all weather" "S.A.M.E" technology radio that is set to wake us if a terrifying warning were to come through for our county in the middle of the night. (Thanks Sam for that info!)

But, until then, we are just going to enjoy this early humidity and high temps. Emily sure did enjoy the baby pool in the back yard this afternoon. (As did Dakota.) I sure hope they get moving with our neighborhood pool so that it will be ready soon!

I can't remember the last Easter that I had when the temps were around 92. Happy Easter everybody!
Posted by Scott and Malisa Johnson at 4:51 PM No comments:

Look what bargain I found? 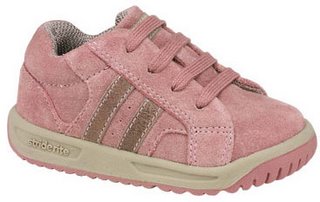 I'm a little bored tonight, so I decided to go on-line to look at toddler forks for Miss Em. However, I came across these shoes. Aren't they so cute? And they are made by Stride-right, who offer widths for Flinstone feet babies like Emily. I just had to share my great deal. I got them totally cheap. I'm sure she will be stylin' in these new shoesies!
Posted by Scott and Malisa Johnson at 10:55 PM No comments:

In case you haven't heard the new already, the new Apple Intels will run Windows XP using a free piece of software called Boot Camp.  You have to provide your own Windows XP.  All you need to do is hold the control key to tell the computer which system to boot from.  It will burn all your Windows drivers onto a CD.  Damn I love Apple.
Posted by Scott and Malisa Johnson at 10:19 AM No comments:

But here is the thing. In the middle of the game, the clouds move in, rain sets in... in some places it actually hailed. It was over eighty degrees. Unbelievable. Then at the end of the inning when we were going back into the dug-out I hear the ump talking to the other coach about how we may have to go get in our cars in case of a tornado, so he wanted everybody to be watching.

What in the world?

Never in my life did I think that I (#1) would be playing softball and (#2) be watching for tornados at the same time. Living in the south is kinda crazy.

Also at school this morning had our first tornado warning which means that there was one sited. (watch means to watch out because the conditions are just right for one, and warning means that a funnel cloud has actually been sited. It took me awhile to understand that. To me, watch means, "Watch out, there's one a 'comin!" )

Anyhow, in all my time in school and teaching everything has just been a "drill." It was crazy to have something actually happen, though nothing happened really at all.

I still can't figure out which is worse, a tornado, or an earthquake. I guess we are really okay with the tornados as long as we aren't living in a trailer!
Posted by Scott and Malisa Johnson at 8:44 PM No comments: